Sharp’s new top of the line visual solutions display, the product of a partnership with Microsoft and Foxconn, recently became available in Canada, and Sharp is focusing on its capabilities to differentiate their technology from competitors. 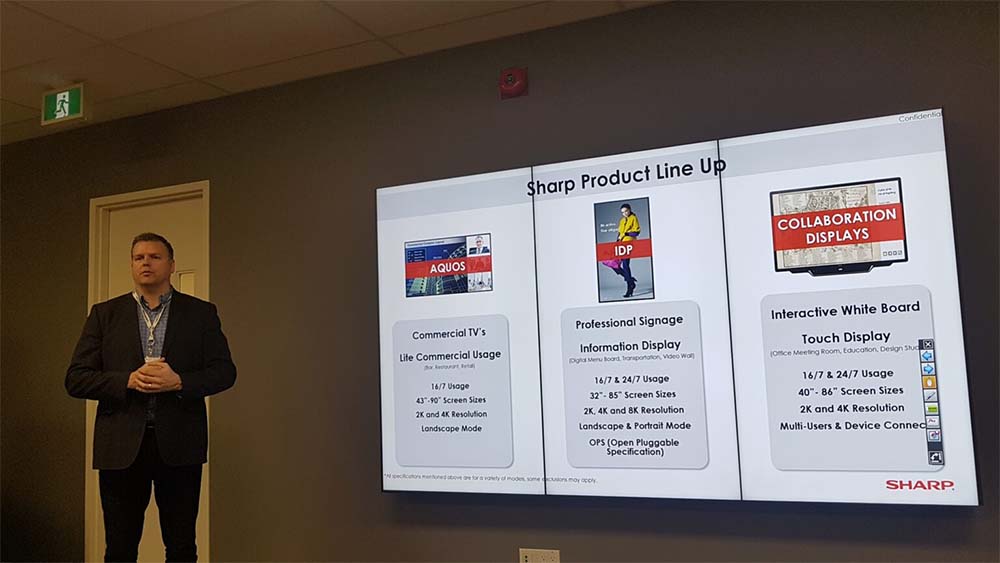 MISSISSAUGA – On Tuesday, Sharp Electronics Canada took advantage of a brief hiatus between heavy snowfalls at the western edge of the Greater Toronto Area to hold an Open House for their Visual Solutions at their Canadian head offices. Sharp has just refreshed several of their product families, including MFPs as well as displays, and all these product lines were on display. However, the principal purpose of the Open House was to highlight the new Windows Collaboration Display from Sharp, the company’s new top of the line offering in the display space. It’s an offering that will be principally limited to the higher reaches of the market, but which Sharp is counting on to strengthen their positioning as a technology leader in the visual solutions space.

“This Windows collaboration between Sharp, Microsoft and Foxconn is the first such collaboration from Microsoft,” said Carmine Cinerari, President of Sharp Electronics Canada, in opening remarks to the audience. Microsoft provides the software, Sharp the display technology, and Foxconn, the Taiwanese electronics giant who purchased a controlling share in Sharp in 2016, and is generally credited with having brought stability back to Sharp’s business, provides the manufacturing, parts, and supply chain efficiencies.

“What Foxconn provides generally isn’t visible, but the supply chain is slicker and the manufacturing costs are a lot lower, which has helped Sharp return to consistent profitability,” Cinerari stated.

“We were the market leader for a long time, although that wasn’t very well known because the market in Canada is hard to measure,” he indicated. NPD and PRC measure it. NPD, however, measures distribution and until very recently, we went to market by selling direct to AV dealers, so weren’t captured in their numbers. PRC did capture our presence, but their numbers weren’t well circulated. We were number one until about two years ago, when Samsung came on strong.” Since then, some other competitors have made investment in newer plants and larger devices, and Sharp tends to rank third of fourth in sales in Canada, depending on the month.

The new Windows Collaboration Display is one of the key elements that Sharp is looking to in order to return to supremacy in this space. Murphy indicated that Sharp’s visual products essentially fit into a ‘Good-Better-Best’ spectrum with the Collaboration solutions making up the ‘Best’ component. The ‘Good’ is Sharp’s Aquos line, for screens aimed at the value market and at customers who don’t want a lot of extras like extra connectivity. This series, available in sizes ranging from 43 to 90 inches, is slated for a refresh in the spring. The ‘Better’ models are a collection of series with brighter displays and more advanced connections, including the PNY series where the AV resellers focus, the PNHM System-on-a-Chip family that is strong in retail, especially the quick service industry, and the 24/7 PNR series that launched late last year.

Sharp’s collaboration displays, which are now in their ninth generation of touch technology, are their ‘best’ category. This category also has multiple models. The PNC-H is the ‘Good’ and the PNL-H, which features a brand new touch technology with the beam inside the glass, rather than the PN-H’s more conventional infrared technology, is the ‘Better’. The new Windows Collaboration Display – technically the PNC-D, is the best of the best, with Murphy highlighting three advantages, over other Sharp products as well as over rival vendors.

“First, it is the only product out there that is Microsoft approved,” he said. “With the introduction of Teams, Microsoft has moved heavily into this space. Teams is their quickest selling product ever, and had over 20 million daily users in November – double from what it had been four months earlier.”

Secondly, Murphy highlighted the PNC-D’s extreme ease of use.

“Microsoft says that it typically takes 12 minutes to connect to a meeting, which is one thing their Surface Hub addressed,” he noted. “Our device also has this true Microsoft Plug and Play spec. It also has a brand new connecting technology, USB-C, which combines multiple cables into one to provide power, audio and video. This 24-inch cable ships in the box. We also have Quicklaunch software that lets you one-touch into a Teams or Zoom meeting.”

The fact that the Sharp product supports Zoom is a major differentiator over Microsoft’s own product.

“Microsoft today is a closed ecosystem with Teams,” Murphy noted. “We are an open architecture, even though it is optimized for the Microsoft experience.” Sharp’s offering also has a 70-inch screen, compared to Microsoft’s 50-inch.”

“This is advanced meeting technology, with a sensor hub that keeps track of things in rooms – like lighting, temperature and the number of people, and can automatically change conditions, such as raising the speaker level if there are fewer people in the room,” Murphy said. “It lets users see how well their rooms are being used. And the beauty of this is that the connectivity is inside the screen itself, with the mic array having the intelligence to track across the room to optimize specific speakers.”

The display does not require a PC to work, but one can be easily attacked to its back, if desired.

“It really depends how a room is set up,” Murphy indicated. “If the device has its own room with its own account, you likely want a dedicated PC.”

The Windows Collaboration Display’s major limitation in the market is that it is expensive, and will fit into a fairly select range of use cases as a result.

“It is aimed at Fortune 100 companies with a budget for that specific use case,” Murphy said.

The Windows Collaboration Display is available in Canada now.

TAKE THE NEXT STEP

What to learn more about how CIP Office Technology can help you? When you're ready to take the next step we're just a click away. Simply click the contact us button in the lower right of your screen to start a chat during business hours and one of our specialists will get you on your way.

We email about once a month and you can opt-out anytime with just one click.

Join our newsletter and once a month we'll send you featured industry news and key specials. 1-click opt-out anytime.

Plus, for a limited time only get our MFP Security Infographic when you sign-up as a free gift and check if your MFP, copiers, and printers are up to the security challenge.